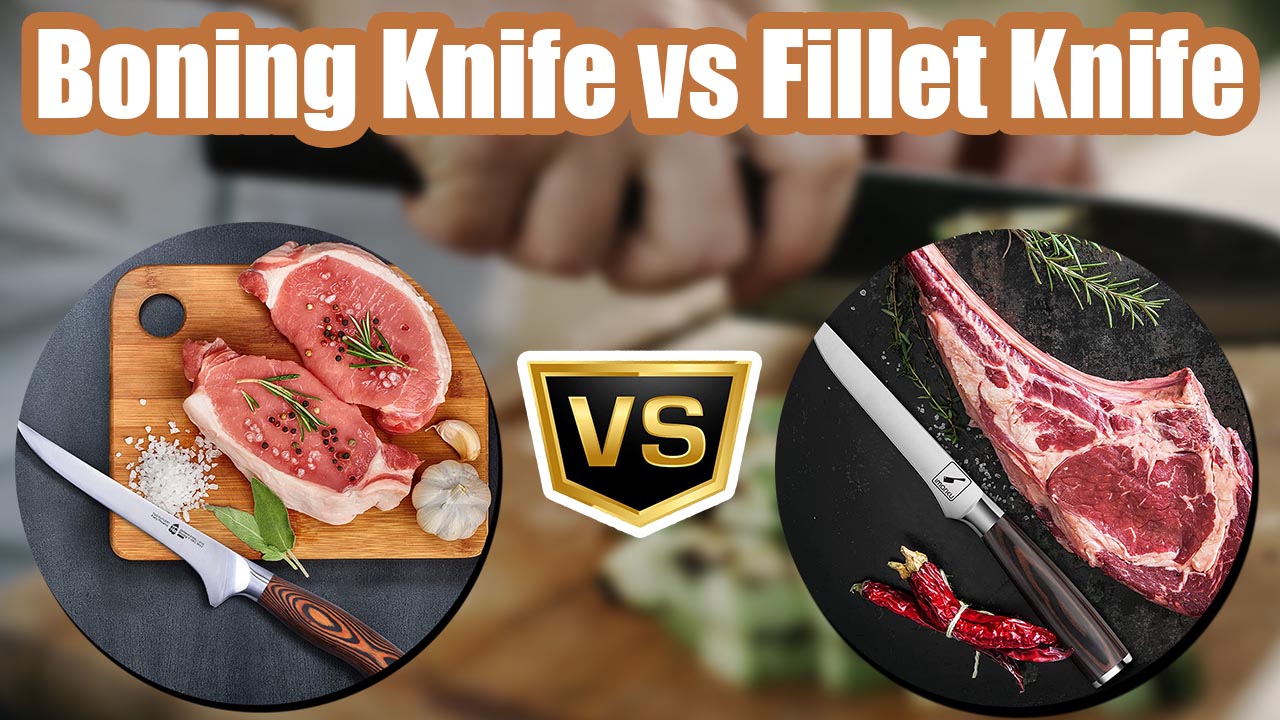 One of the most important tools in a kitchen is a good knife. There are many different shapes, sizes and functions to choose from when selecting a knife.  There is one particular type of knife that has been used for years by chefs around the world: fillet knives.  However, recently boning knives have become more popular as they can be used to do some of what fillet knives do but with even greater precision and ease.

This blog post will discuss all things related to these two types of cutlery so that you can make an informed decision on which one would best suit your needs!  Read on!

Chefs may have a preference for either boning knives or fillet knives. Both types of knives are used to cut meat, so the main difference between them is how they are best used. A chef’s choice in knife will depend on their taste and personal preferences.

A boning knife is typically shorter than a standard chefs knife, which makes it easier to work with smaller cuts of meat that do not require as much precision as larger cuts.

It also makes it more effective at removing bones from meats like chicken or pork that need to be completely deboned before cooking. The blade itself is curved and narrows towards the tip, making it perfect for maneuvering around joints and small spaces where bones could be.

A boning knife is a versatile kitchen tool that makes it easy for chefs to trim, bone and cut meat. The long, narrow blade allows the cook to work in tight spaces like around joints or along bones without damaging tender areas of meat. This type of knife is also great for scraping away stubborn bits of fat and gristle from the surface of raw foods before cooking them. Boning knives are made with either flexible steel blades or rigid stainless steel blades.

Flexible blades are perfect for working on whole fish because they will bend to follow the contour of the bone while rigid blades can be used when cutting through hard bones where flexibility isn’t needed.

A fillet knife is a kitchen tool that can be used in various different ways. The blade of a fillet knife is flexible and thin, making it perfect for cutting through meats and fish. This type of knife also works well when separating meat from bones or removing the skin from chicken, turkey, duck, etc. Fillet knives are typically between six to ten inches long with blades ranging from three to five inches long – depending on what you plan to use it for!

A boning knife is a narrow blade knife with a thin, flexible blade. They are used for removing meat from the bone and other tasks in the kitchen.

A fillet knife has a long slender blade that’s typically 6-8 inches in length. It’s often used to filet fish or remove skin from poultry because it has less drag than other knives due to its longer, thinner design. Both of these types of knives are essential tools when cooking at home.

A boning knife is a specific type of blade that you will find in your kitchen drawer. These types of knives are designed to be thin, flexible and have a very sharp edge. They are perfect for removing meat from the bone or filleting fish because they can fit into tight spaces more easily than other knives. Here are some reasons why having a boning knife around the house may come in handy!

A fillet knife is a versatile tool that can be used for more than just removing the bones from a fish. In this blog post, we’ll explore some of the many uses of a fillet knife and why it’s an essential piece in any kitchen arsenal.

In addition to removing bone from fish, you can use your fillet knife to remove scales, skin and other tough tissue from various meats such as chicken or pork. You can also use it to debone poultry or break down whole animals into manageable pieces for cooking. If you need to cut food on a plate or board without cutting through them both, then your best bet is using one side of your blade with just enough downward pressure so that the blade doesn’t slip off course.

The boning knife style you should be using is determined by the type of meat that you are working with. A boning knife is used to remove bones, tendons and cartilage from a piece of meat. The blade will need to reach deep into the joint where it connects to the bone for these cuts; this can make it difficult for cooks who don’t have strong hands or fingers, so choosing the right style may be necessary.

Choosing the right fillet knife is important for any cook or chef. While there are many different styles available, all of them have the same basic components that make up their construction. A blade, handle and sheath are required to be included in every fillet knife set.

It’s important to think over your purchase carefully so you can get the best knives possible for your kitchen needs. Even though each style has these three features, they vary greatly when it comes to size and flexibility which will determine how easy it is to use on various meats and fish types. For example, some blades are flexible enough to allow chefs more control while others are stiffer with a straight edge allowing more precision cuts with less movement needed by the user’s hand.

A boning knife is a type of kitchen knife used for cutting meat and poultry. It has a thin, flexible blade that can be curved to separate flesh from the bone or muscle tissue. A stiffer blade would risk breaking on the bone or tearing the muscle tissue. The tip of a boning knife will often have a pointed shape, with one side being sharpened to allow it to cut into joints as well as around bones and cartilage.

A fillet knife is a special kind of kitchen knife that has a long, flexible blade. It allows for easy maneuvering around bones and joints in order to separate meat from the bone without damaging it. This type of knife is also known as a boning or filet knife depending on where you are in the world.  The price range can vary widely depending on what brand and model you choose but they typically run somewhere between $20-50. If you want to cut up your own fish at home, this can be an excellent investment.

Conclusion paragraph: Boning and fillet knives are both used to cut through meat, but they have very different purposes. Fillet knives typically have a blade that is much thinner than the blade on a boning knife and their blades aren’t as flexible. This makes it difficult for them to move smoothly around bones or other hard objects in cuts of meat like ribs.

The shape of the tip can also make this type of cutting more difficult because you need a sharp point to push into those tough spots. A good example would be if you were trying to remove rib-eye steaks from between two vertebrae; there’s no way a fillet knife could do that without damaging either one.