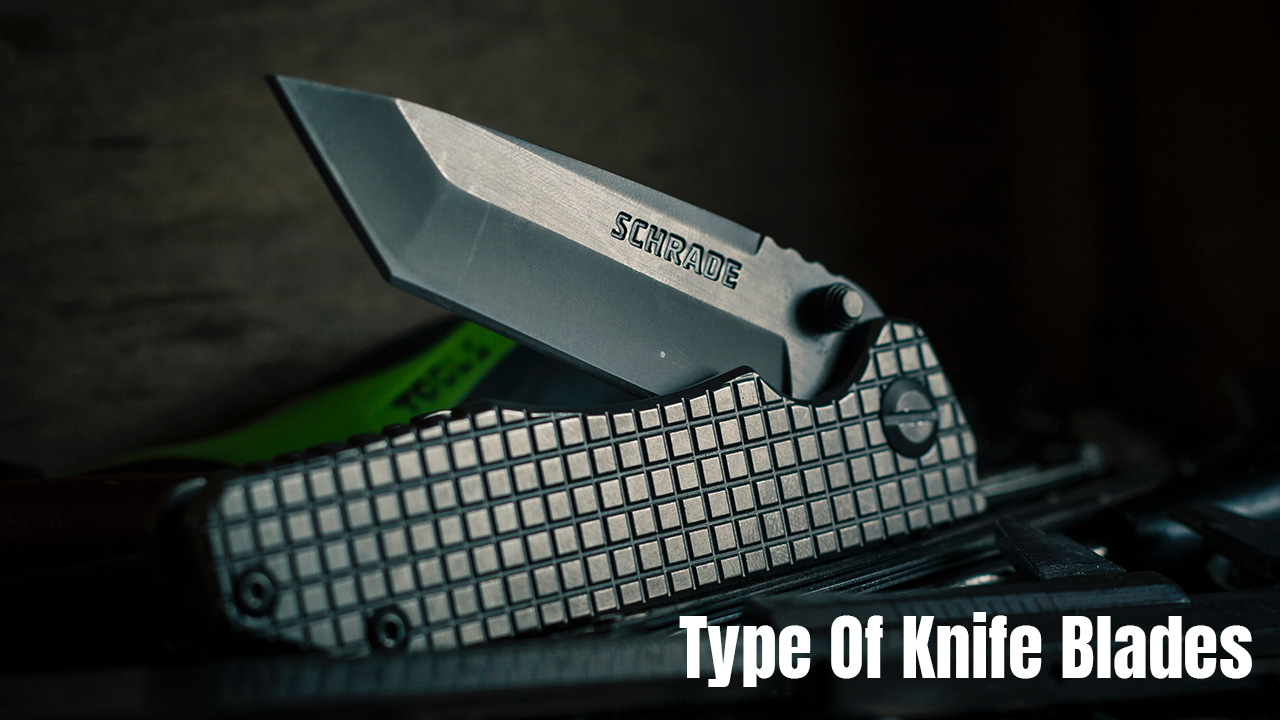 When it comes to knives, there are many types available. Many of them have specific uses or blades that work better than others for different tasks. They come in all shapes and sizes, with various blade styles, edge angles, and materials.

Knives can be used for hunting, fishing, camping or just as an everyday tool. It is important to know the difference between types of knife blades before choosing what you need for your project.

There are many different types of knives available. Each type has its own blade and is designed to serve a specific purpose. After deciding on the intended use, there are some basic categories where they can be sorted into hunting, pocket, and kitchen.

Hunting knives are good for dressing and skinning game. They can be fixed blades or folding. Fixed blades usually have a heavy blade and no moving parts, which means it is safer to use and less likely to malfunction. Folding knives can be used by hunters who need compact carry options while on the move in the field. Some hunters prefer a one-piece knife, like a machete, for clearing brush and harvesting game.

This type of blade normally has an edge with an unsharpened backside that runs to the tip of the knife. This allows for more precise cuts without sacrificing some strength. 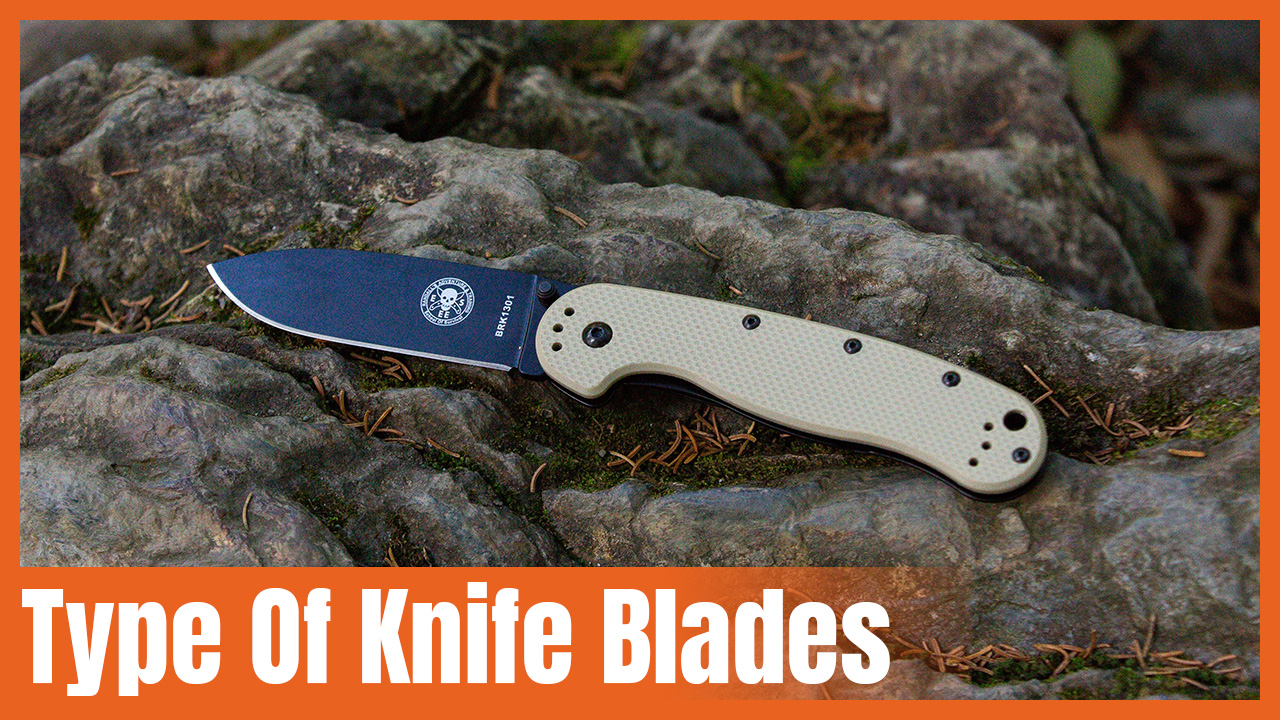 Recently, there has been an increased interest in fixed-blade knives. They are considered to be more practical than folding or retractable, since fixed blades can be used for many different purposes. An example of this is the drop point knife blade , which is incredibly versatile and strong. It is very common among hunters and other people interested in knives and survival.

A drop point knife blade is characterized by its unsharpened back edge that forms a large curve until meeting the straight, narrow blade spine (which may also be sharpened). It gives strength to the tip while still allowing it to retain some flexibility.

Tanto blade type refers to the style of blades that combine characteristics of both the long and short bladed knives. This is done by having a straight edged side and a sharp angled edge on the other. The Tanto blade has two different styles, one with the flat part in the center and another with it near to the point.

Both types are designed for stabbing, thrusting and slashing. This means that the Tanto blade is well-suited for fighting in close quarters.

The Tanto knife has its origins in Japan where it was used by Samurai warriors as their primary weapon. The word ‘Tanto’ refers to the Japanese short sword which is similar in shape to this.

The tanto blade design is best described as a cross between a dagger and a straight blade. The basic outline of the tanto is similar to that of a katana, just the tip curves back in towards the spine. Traditionally they were used by samurai for combat or seppuku (ritual suicide) but have also been used in Tanto-jitsu or Tanto fighting to disarm, injure or kill the opponent.

Today tanto blades are used by soldiers, law enforcement officers and rescue personnel as heavy duty utility knives/survival knives. The design makes it easier to cut through tough material much like a katana where you can apply leverage to cut deeper without breaking the blade.

As a part of the modern-day cutlery industry, knife blade types have been created to fulfill an incredibly wide range of purposes from utility to defense. Each knife has a specific shape for a specific purpose and each type comes with its own strengths and weaknesses. One example of this is the famous drop point blade.

The term “drop point” refers to the shape of the blade. As its complete name suggests, it drops from a ridge down to a sharp point on one side and flattens out as it reaches the edge on the other (the “drop”), forming a large surface-area curve near the tip. This impressive feature allows for efficient cutting through tough materials such as leather.

Trailing-point blade type are very common in shape and use. They’re used for many purposes, including hunting, camping, cooking, combat and gardening.  Some of the most common style of trailing point knives have a concave shaped blade that makes it easier to sharpen when dulled.

In combat trailing-point blades can be thrown or  thrust at an opponent. During the Second World War the U.S. Marine Corp issued a pocket knife with a stainless steel blade shaped like this, which they named ‘the John Wayne’ after the actor’s heroics during the Battle of Iwo Jima.

The benefits of using one of these knives are that it is affordable and durable.

Straight back blade knives have a back side of the blade opposite of the cutting edge which is straight. The blade extends to meet the handle where it curves towards the front. This type of blade can be found in many different styles, shapes, and sizes among pocket knives, folding knives, fixed blades, kitchen knives or other types of cutlery.

An Assist Blade is one of the special types of blades used in Japanese swords. These blades do not fit into the typical classification scheme for Japanese blades, which distinguishes between various blade types according to their function, construction or length.

An Assist Blade (literal translation) is a katana that has ‘assistance’ (aids?) attached to it. These swords cannot be found on the market, unless they have been illegally smuggled out of Japan. Assist Blades are strictly regulated by Japanese law and may not be taken out of Japan without a special permit from the authorities.

Assist blades were mainly used for executions in Japan, so it is suspected that all of them have been destroyed after the abolition of the death penalty in Japan.

Assist blades are said to cost around 500.000 US dollars, but there is little information available about them. Some people claim that they have been manufactured to order for an unknown buyer from a smith who used to work for the Japanese imperial family hundreds of years ago.

The Bowie knife is a large fighting and hunting knife characterized by its clip point blade, which has an angle on the sharpened edge of 15 to 20 degrees. This gives it a strong but controllable point that is useful for stabbing attacks as well as slashes.

The original design of Bowie knife by Jim Bowie was long enough to qualify as a short sword and had an estimated 18-inch blade. The curved part of blade above the handle increased it was also used to cut a piece of meat cleanly from bone.

In the early years of Bowie knife, smiths were making it with a narrow blade for better slashing ability and improved ergonomics. However, later smiths started to make new knives with long blades which were more suitable for stabbing. At this time, new sheaths were made for carrying Bowie knife on the belt.

The traditional Bowie knife is double-edged with a clip point, which makes it well suited for slashing cuts when used with either edge of the blade. The cross section of the blade is similar to a “U” shape, thick in the middle and tapers back at both ends.

One of the most important parts in coping concrete forms is the blade that cuts the concrete into place. There are several types of coping blades, each with their own benefits and disadvantages, but they all have one goal in common: to cut precise angles.

The two main types used for cutting concrete are wedge-shaped and T-shaped blades.

The wedge-shaped coping blade has an edge that is either shaped like a beveled wedge or like half of a T. The benefit to using this type is that it can make an angle up to 45 degrees, which makes it the most versatile of the two types. The disadvantage is that it can create a coarse cut and if used for a vertical cut, there is a chance of it chipping away larger chunks of concrete.

A T-shaped blade has the same benefits and disadvantages as the wedge-shaped type except for one: when used to make very fine cuts, such as when making coping strips for block or brick walls, it can also create an almost perfectly smooth edge.

Dao is a Chinese term for single-edged, broad bladed saber.

Dao have been used in Asia for thousands of years and they have become a major weapon in China’s military history.

In recent centuries, Dao blades have been seen as antiquated weaponry by the military leaders of China, so it has been replaced by European styled swords and bayonets.

The blade is basically the main part of a knife. It is usually made up of metal, steel being the most common type. However, some are also made from other materials such as ceramic. Modern day blades are usually given to us in factory-ready shapes that only need minimal sharpening before they are ready for use! Types Of Knife Blades Each blade has a different use.

Types Of Knife Blades Each blade has a different use.

The blade is basically the main part of a knife. It is usually made up of metal, steel being the most common type. However, some are also made from other materials such as ceramic. Modern-day blades are usually given to us in factory-ready shapes that only need minimal sharpening before they are ready for use!

The blade is basically the main part of a knife. It is usually made up of metal, steel being the most common type. However, some are also made from other materials such as ceramic. Modern day blades are usually given to us in factory-ready shapes that only need minimal sharpening before they are ready for use!

There are three main types of blades. They are the edge, the serrated, and blunt/flat blade. Each one has a different use and is useful in certain situations.

The Angle Edge Knife Blade The angle edge knife blade, as its name implies, has an edge that is angled at a certain degree. This type of blade is mostly used as a butchering knife for cutting meat off large animal bones. The reason why it is called this way because the thinness of the blade makes it easier to slice meat from big bones with ease!

The serrated knife blade, is a type of knife that has very small and sometimes pointed teeth on the blade. The teeth are usually on the wider side and makes it easier for you to cut through items like plastic, meat, cardboard and other types of materials. Serrated blades can also be used as a saw because of its teeth!